The Speed Trials takes place along Brighton’s historic beach front, Madeira Drive. It started in 1905 making it the longest-running motorsport event in the world!
Find out more…

BHMC has a clubhouse in the arches under Dukes Mound on the seafront. Our Committee, Bar and Snooker Rooms are open to club members every Wednesday from 8pm until 11pm. Non-members are welcome to pop in too.
Find out more…

The longest-running motorsport event in the world 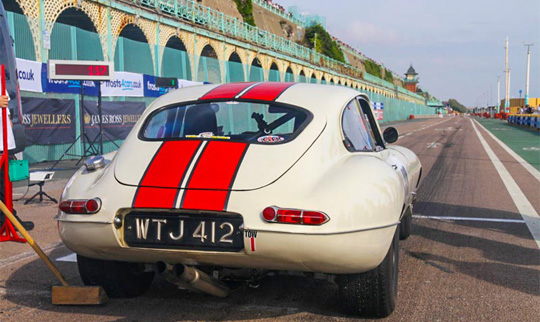 In 1905, local hotelier Sir Harry Preston persuaded the Town Corporation to lay a motor racing track. A track which used the pioneering material of Tarmac. It was the first of its kind.

The event know originally as “Brighton Motor Week” ran from the 19th – 22nd July 1905 and consisted of a series of motor races.

The first event ran westwards, from Black Rock to the aquarium, the opposite directions to which the race runs today. It attracted over 400 entries and their cars were classified according to their prices! They were timed over a flying start kilometre and were allowed to have passengers.

During the first event, three world records were broken.