History of the Brighton Speed Trials

In 1905, local hotelier Sir Harry Preston persuaded the Town Corporation to lay a motor racing track in Brighton. A track that used the pioneering material of Tarmac as its surface, the first of its kind.

The Town Council collaborated with the Automobile Club of Great Britain and Ireland to organise an event known as Brighton Motor Week. The event ran from the 19th – 22nd July 1905 and consisted of a series of motor races.

The first event ran westwards, from Black Rock to the aquarium, the opposite directions to which the event runs now. It attracted over 400 entries and cars were classified according to rolling chassis prices. They were timed over a flying start kilometre and were allowed to have passengers. Motorcycles competed in handicap races and were timed over a standing start mile. Classes were based on engine capacity, the weight of the bike and the weight of the rider.

During this first event three world records were broken, two by French motorcyclist Henri Cissac. Henri set a new record for the flying kilometre, with a time of 26 seconds, and a top speed of 86mph. He also lowered the standing mile time to 53.2 seconds. The other record was set by Harry Rignold who lowered the flying mile record from 64 seconds to 46.2 seconds.

This first event was entered by The Hon. Charles Rolls (later of Rolls Royce fame). He took part in an enormous four-cylinder 26.5-litre Dufauls. Unfortunately, it started belching flames and smoke while making horrendous moaning noises terrorising the crowds as it did so! it is alleged that the car was still being built on the channel crossing on its way to Brighton.

The last day of the week was essentially a “Ladies Day” and the best performance by a driver was by Dorothy Levitt in an 80hp Napier.

This first event drew huge crowds to Brighton and also included several concerts throughout the city and a pre-race banquet!

Hon C S Rolls 26.5-litre Dufauls
Clifford Earp on the 90hp Napier
Dorothy Levitt on her 80hp Napier
Queuing for the start
The spectator view for the first Speed Trials

Unhappy locals and a ban on racing

The following year the Speed Trials were placed under threat. A body of ratepayers obtained a ruling stating that the resurfacing work was “wasteful, extravagant and unnecessary and therefore illegal”. Fortunately, in 1907 an appeal was won because the improvements were deemed to benefit the public and create a smoother surface for all users.

It would be 18 years, however, before an event was run again. The now established Brighton and Hove Motor Cycle and Light Car Club organised an open event on the 14th July 1923. This time the event ran in the opposite direction the same as it is today. The club ran the competition as a measured half-mile with a standing start. Competitors were run in pairs and individually timed. The event attracted between 200 and 400 competitors and over 10,000 spectators. The fastest time of the day was recorded by motorcyclist EH Spencer on his Douglas 494cc at 69.29mph.

In 1925 a ban on racing on public roads came into force and no events took place until 1932. In the intervening years, Speed Trials were held at the Brooklands circuit in Surrey. It was not until someone realised that Madeira Drive belonged to the Town Corporation and was therefore not subject to the ban. So Brighton and Hove Motor Club (as it was now known) obtained permission to use it and switched Speed Trials back to Brighton.

The 1932 meeting attracted a huge crowd estimated at 100,000. The most outstanding feature of the afternoon was the battle between Sir Malcolm Campbell in his supercharged Sunbeam Tiger and Mr John Cobb in a huge Delage. Although Cobb made the better start, Campbell gracefully reeled in his rival and crossed the finishing line at 120mph, winning by 13 yards and creating a new car record.

The following year, a new course record was set by Noel Pop on a Brough motorcycle. He covered the half-mile course at an average speed of 80.36 mph. A time that meant he must have crossed the finishing line approaching 130mph.

The Speed Trials were again threatened in 1935 when there was a proposal to put a roof over Madeira Drive and turn it into a covered car park for 3000 cars. Luckily these plans did not materialise and the event was allowed to continue up until the war.

Restarting after the war

The Speed Trials were restarted in 1946 and the course extended to one kilometre. Racing equipment was in short supply after the war but some ingenious constructors made use of surplus military machinery. One example was Archie Butterworth who assembled his AJB using a Steyr V8 engine from a German military vehicle installed in a Jeep chassis with four-wheel drive.

In 1963 Americans Dante Duce and Mickey Thompson came over to Britain to demonstrate the sport of Drag Racing. They competed against Sydney Allard who ran his home-built dragster. Sydney was the founder of the Allard car company and a successful driver. Unfortunately, the Dragsters could not perform to their full potential due to the uneven surface and the fact they were not set up to run a kilometre. They usually competed over a quarter-mile distance. Dragsters were, however, a popular attraction until 1974 when they were stopped from entering due to safety concerns.

In 1975 the Speed Trails came close to being postponed due to lack of finance. Luckily, with tremendous support from competitors and minor sponsorship from London tobacco merchants Fribourg and Treyer, the event was able to run.

In 1980 the Speed Trials celebrated their 75th anniversary by reverting to the 1/2 mile standing start; a format used in the pre-war events. This allowed some assaults on the previous records which were smashed by the more modern designs and engineering. The previous record of 22.45 seconds was comprehensively beaten by Mark Williams in his Hesketh DFV. He reduced the record by almost seven seconds!

Since 1981 competitors have run singularly as a safety precaution, initiated by the rising speeds of modern machinery. In 1986 the Speed Trials saw a change in the class structure into which the cars are divided.

Despite torrential rain, another record-breaking day took place in 1987. The seven-year-old course record for cars was broken by Clive Bracey in a Vebra Chevrolet. His blistering time of 15.23 seconds took him to a speed of 183mph. Twelve of the fifteen class records were also smashed.

The Brighton Speed Trials made their Television debut in 1989. The event was filmed by BBC Television for its Top Gear programme. The programme’s presenter, Tiff Needell, drove a Lotus Esprit Turbo SE, a TVR 450 SEAC and a four-wheel-drive Porsche Carrera. Sadly the event was overshadowed by a fatal accident of motorcyclist John Rich.

Uncertainty returned to the event when the council undertook a rent review of the three arches on Maderia Drive, where Brighton & Hove Motor Club have their headquarters. This was compounded by the introduction by the RAC Motor Sports Association introducing noise restrictions in response to complaints by residents. The decibel limit for cars was lowered meaning many vehicles would have to be fitted with new or larger exhaust silencers to be able to compete.

Frost Cars Ltd made their Speed Trials Sponsorship debut in 1991. Their support is not only financial they also actively co-operate with the organisation of the event.

In 1994, with safety in mind, two changes were introduced to the running of the event. The Course was shortened to 1/4 mile and the Racing Car classes were limited to 2000cc.

1995 marked the 90th anniversary of the first running of the Brighton Speed Trials and saw an entry of the Semmence. It was a car that first run in the event in 1938 when it was driven by its constructor, H. Whitfield “Fatty” Semmence.

At the turn of the century, entries to the Speed Trials reached just under 300. The event was more popular than ever before amongst the crowds and spectators.

In 2005 Brighton & Hove Motor Club celebrated 100 years of the Brighton National Speed Trials. A prestigious milestone that saw 370 entries and a record number of spectators. The day went without a hitch and helped cement the clubs’ position as organiser of yet another successful and increasingly popular event in the motor racing calendar.

A new class was introduced in 2010 for Electric Cars, a sign of the progression in motor engineering. This class continues to increase each year as the development of the vehicles progresses.

In 2011 the event faced yet another problem in its turbulent history. The local council condemned the use of the middle terraces on Maderia Drive over safety concerns about the ageing structure. The terraces had always been a popular vantage point for spectators. To accommodate the displaced spectators, the area near the start line was lengthened. It has become a popular spot for the crowd where they get close to the action. 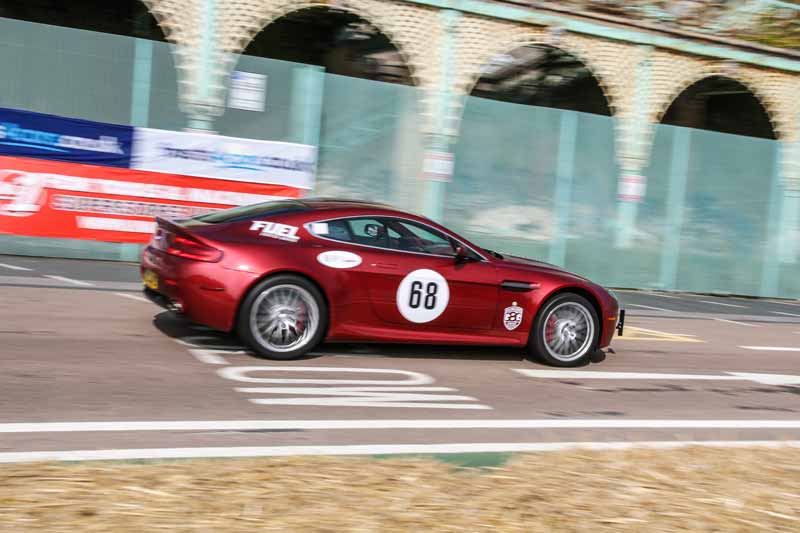